Pesticides and Phytomedicine / Pesticidi i fitomedicina

Pesticidi i fitomedicina (Pesticides and Phytomedicine) is dedicated to the following research fields: chemistry, technology and analytics of pesticides; toxicology and ecotoxicology of pesticides; phytopathology; applied entomology and zoology; weed science; plant and food products protection; use of pesticides in sanitation and public health.

The journal continues the title Pesticidi, which was published over the period 1986-2003.

All articles are published in English, with summaries in English and Serbian.

As of 2020, the journal is issued triannually (three issues annually).

Manuscripts submitted to Pesticidi i fitomedicina (Pesticides and Phytomedicine) are peer reviewed. The journal uses the double-blind type of review for all papers. Each manuscript is reviewed by at least one, but preferably two reviewers. The reviewers act independently and they are not aware of each other’s identities. The reviewers are selected solely according to whether they have the relevant expertise for evaluating a manuscript. No suggestions of individual reviewers by manuscript author(s) will be accepted.

The purpose of peer review is to assists the Editor-in-Chief or another Editor in making a decision on whether to accept or reject a paper. The purpose is also to assist the authors in improving their papers.

The reviewers assess manuscripts for their compliance with the journal profile, the relevance of the investigated topic and applied methods, the originality and scientific relevance of information presented in the manuscript, the presentation style and scholarly apparatus.

The journal Pesticidi i fitomedicina (Pesticides and Phytomedicine) is published under an Open Access licence. All its content is available free of charge. Users can read, download, copy, distribute, print, search the full text of articles, and establish HTML links to them without having to seek the consent of the author or publisher.

The right to use journal contents without consent does not release the users from the obligation to give the credit to the journal and its content in a manner described under Licensing.

Pesticides and Phytomedicine is a science journal of the Serbian Plant Protection Society published for the first time in 1986 as Pesticidi - Jugoslovenski časopis za pitanja proizvodnje, prometa i primene pesticida (Pesticides – a Yugoslav Journal of Pesticide Production, Trade and Application). It was founded by the company Privredni pregled (its publisher), Prof. Dr Radojica Kljajić and his assistants at the Department of Pesticides Research of the Faculty of Agriculture, University of Belgrade, and Dr Ilija Perić and Dr Neško Nešković of the Institute of Pesticides and Environmental Protection, Belgrade. The journal intended to publish original articles of domestic and foreign authors focusing on the production, trade and application of pesticides, their relevant legislation and regulation, protection of humans, food and the environment, education and defensive aspects of research and application of pesticides.

The first volume had four issues and the journal has retained the same number of issues to date. 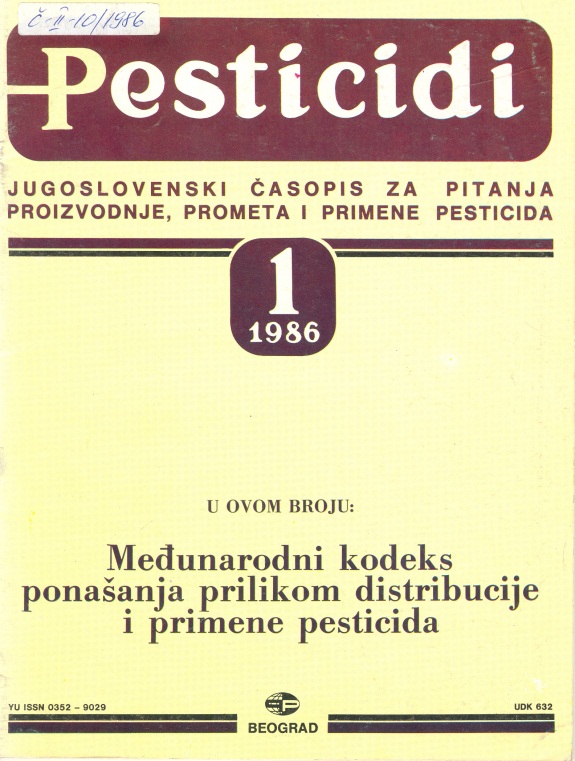 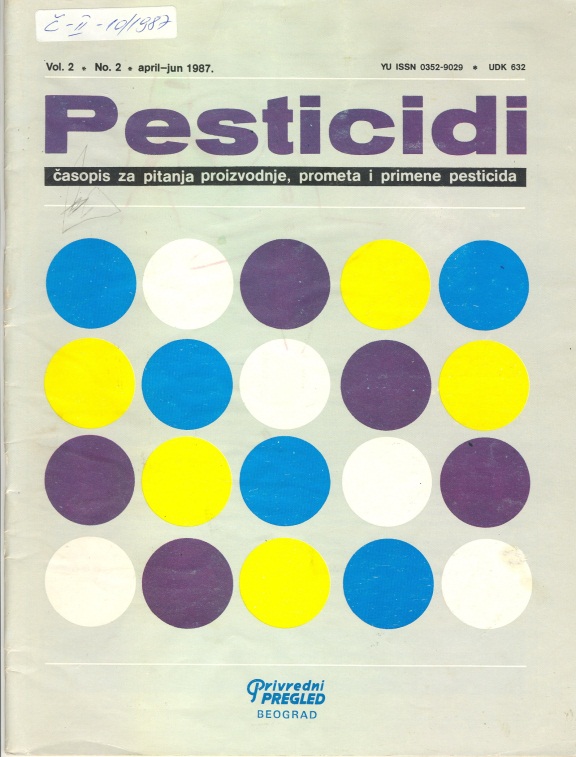 After Prof. Kljajić passed away (March 30, 1987), the position of editor-in-chief was entrusted to Dr Neško Nešković, a principle research fellow of the Institute of Pesticides and Environmental Protection. Dr Nešković was the journal editor-in-chief for 20 years until his retirement in 2007; he edited three issues of the 1987 volume and another 80 issues in Volumes 3-22. During that period, the journal underwent significant status, organizational and technological changes, its quality was improved and rating increased.

The editorial board became international in the mid-1990s when several research fellows from Japan, Czechoslovakia, Great Britain, Denmark, Turkey and the United States joint the board. The journal’s title in the first issue of 1992 had a subtitle “Yugoslav scientific journal”, and the Serbian Plant Protection Society became its copublisher. 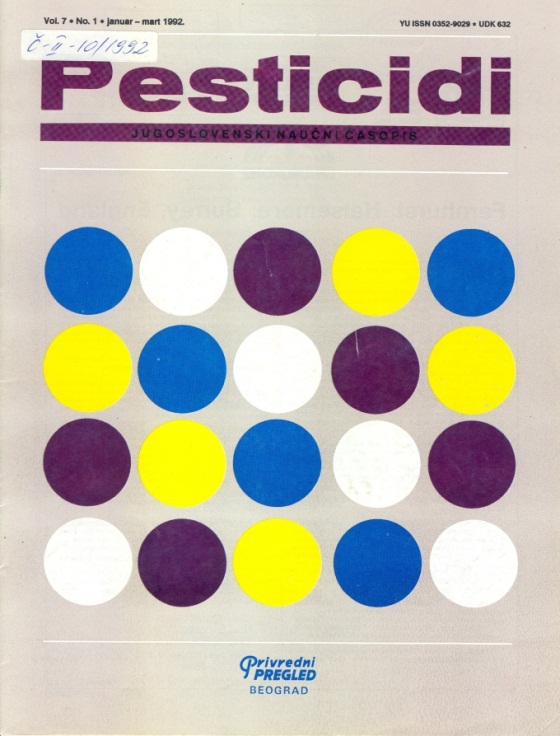 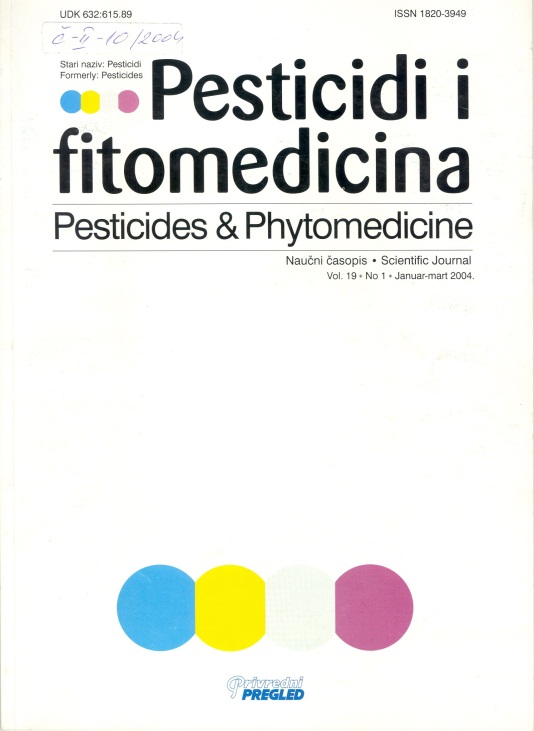 The second issue of the 2005 volume carried for the first time the subtitle “Scientific Journal of the Serbian Plant Protection Society”. In 2006 (Vol. 21), the Institute of Pesticides and Environmental Protection and the Plant Serbian Protection Society became its copublishers. After Dr Nešković retired at the end of 2007, the chief editorial position was assumed by Dr Dejan Marčić, who had previously been its deputy editor-in-chief since 2005. 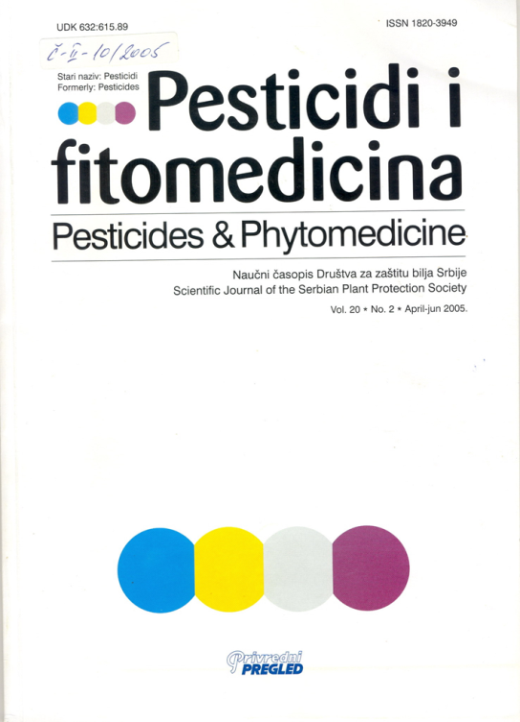 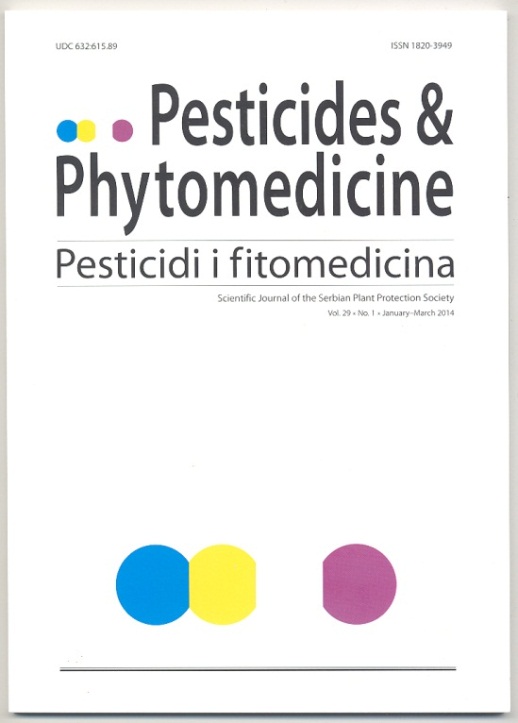 The publishing of Pesticides and Phytomedicine complies with the Science Journal Publishing Act adopted by the Serbian Ministry of Science and Technological Development in July of 2009, which stipulates the equipment of science journals in general and individual articles contained therein, as well as the editorial documentation required. Over the past five years, the journal has considerably improved its global visibility and impact. At the end of 2009, a contract was signed with the National Library of Serbia for joining the DOI (Digital Object Identifier) system, which assigns numerical identifiers to research articles. In early 2010, the journal joined the Directory of Open Access Journals (DOAJ), making its contents available in full-text, open access format starting with Vol. 21, No. 3 (2006). In 2012 (Vol. 27, No. 1) the journal turned English-only, requiring all articles to be written in the English language. Simultaneously, the journal jointed the ASEESTANT system for online journal editing and publishing, which provides for all requirements of editorial management from page opening to article submission, reviewing, administration, archiving, editorial decision-making and publication on its own web page. The system applies its cross referencing (CrossRef, DOI) and plagiarism prevention (CrossCheck) tools to all articles. At the end of 2012, the journal also contracted its contribution to the EBSCO database.

These improvements have raised the journal quality, and the number of articles submitted by foreign authors increased as well. The Serbian Ministry of Education, Science and Technological Development, which has conducted official ranking of domestic science journals since 2009, placed Pesticides and Phytomedicine in the category M51 (leading national journal) in 2009, 2010 and 2012, and in the category M24 (international journal, specially verified) in 2011 and 2013. Such rating confirms the leading status of this journal in the field of plant protection, i.e. phytomedicine.

MAKE A SUBMISSION
Information
© Copyright 2021. Centre for Evaluation in Education and Science
This field is required.
Close
Ensuring a Blind Peer Review